🥩 “Texas Style” Brisket 🥩 Texas barbecue is synonymous with brisket. This brisket recipe is a straightforward technique and simple ingredients but can be difficult to master.

The first thing to note about brisket is that a whole brisket is actually made up of two distinct muscles. The flat and the point. Lean and fatty. To add to the potential confusion, you’ll oftentimes see flats sold as “brisket” or “brisket flat” and whole briskets sold as “brisket” or “packer brisket”. For this “Texas Style” Brisket select a well-marbled whole “packer” brisket. This means selecting a USDA Choice or Prime because it truly is a case of garbage in, garbage out. The brisket can be tricky to cook properly, but having a well-marbled quality starting product is the first step toward reaching the pinnacle of barbecue — beef brisket.

When done well, the brisket is as good as barbecue gets, done poorly it can be dry and tough. Follow these steps to get a great result every time. To have a great end result with brisket you need to start with a great product. Always choose USDA Choice or higher brisket. The first step is to trim the brisket down. There’s a large fat cap on top of the flat that should be trimmed to about ¼”. This leaves enough fat to protect the meat for over a long smoke but not so much that it’ll have to all be trimmed off when it’s time to eat. Flip the brisket over to the leaner side. Trim all the fat and silverskin from the flat. Some cooks will separate the point from the flat, it’s not really necessary and will be super easy later on after it’s cooked. Instead just remove some of the hard fat in the thick vein between the point and the flat without separating them. That gives a little more surface area on the meat for the rub and is less to trim later. For a texas style brisket we’re going to keep it really simple — just salt and pepper. Mix ¼ cup Kosher salt and ¼ cup Monterey Bay 16 Mesh black pepper 50/50. Spread the rub evenly on all sides of the brisket. You can do this prep the night before or up to 30 before your smoke. Put the brisket in a large pan covered with plastic wrap and refrigerate until you’re ready to get it on the smoker. 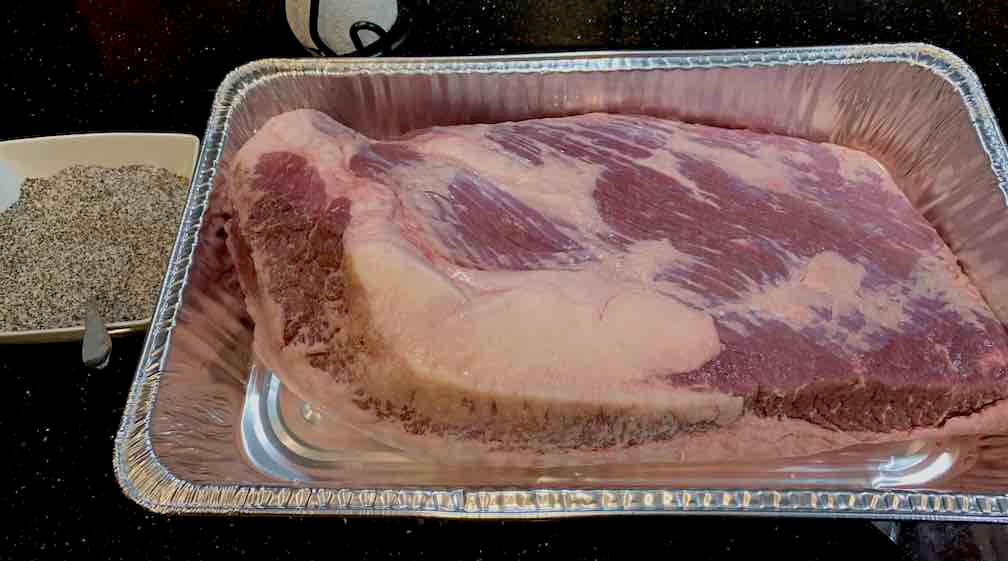 Set up your smoker for low and slow smoking at 225°-250°. Brisket is a large cut of beef that can take on any hardwood you’d like. But we’re doing this texas style and that means we’re using oak. Put the brisket on the smoker fat side up. The general rule is that cooking time will be 1-1 ½ hours per pound of brisket. Every brisket cooks a little bit differenlty so it’s more important to pay attention to temperatures rather than time. A Thermapen or Meat Thermometer will come in very handy as we’re aiming for some specific temperatures. The first of those is 160°. At that temperature the brisket will hit “the stall”–a period of up to six hours where the temperature is held nearly constant due to evaporation.

To counteract the stall, pitmasters often apply the “Texas Crutch”. That is, wrapping the brisket in tin foil or butcher paper. I use butcher paper, but there are tradeoffs with each of those approaches:

When the temp has been stuck around 160° for an hour wrap it in butcher paper. After wrapping the brisket place it back on the smoker fat side up until your thermometer reads 203° 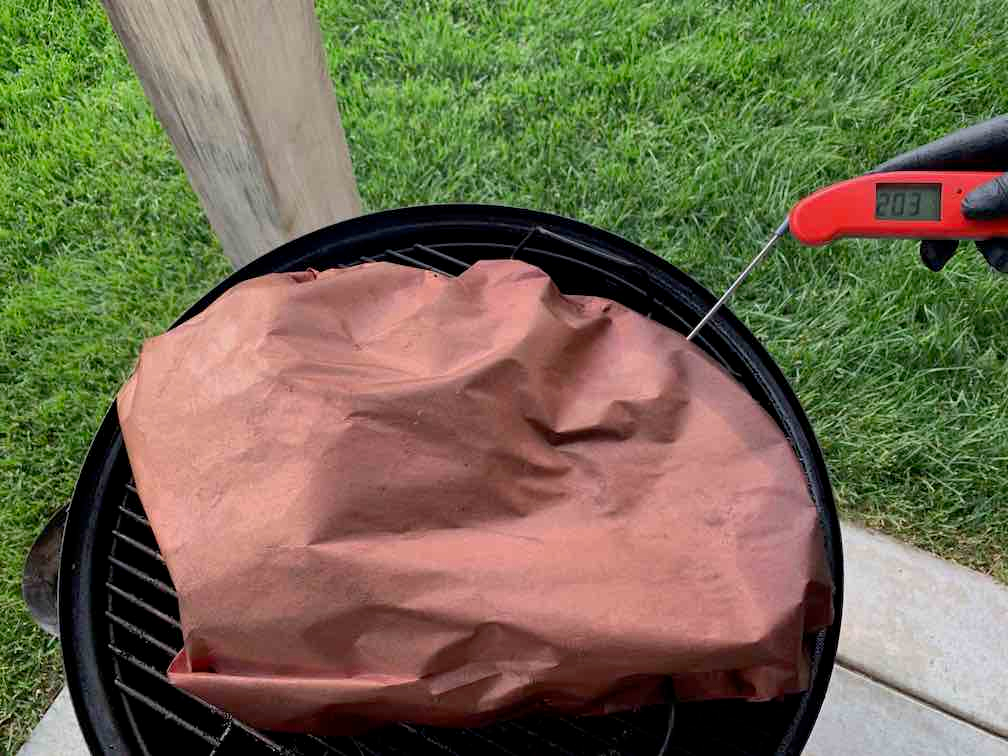 Once the brisket hits the 203° a knife will slice through the meat like butter. Normally I’d suggest making Burnt Ends, but for this recipe we’re going to cut it into “lean” and “fatty” slices. With a sharp slicing knife cut the flat against the grain. Cut each slice about ¼” thick.

When you get to where the point covers the flat rotate the brisket 90 degrees and make your cuts ⅜” thick. Each slice should hold together under its own weight but be pull-apart tender. 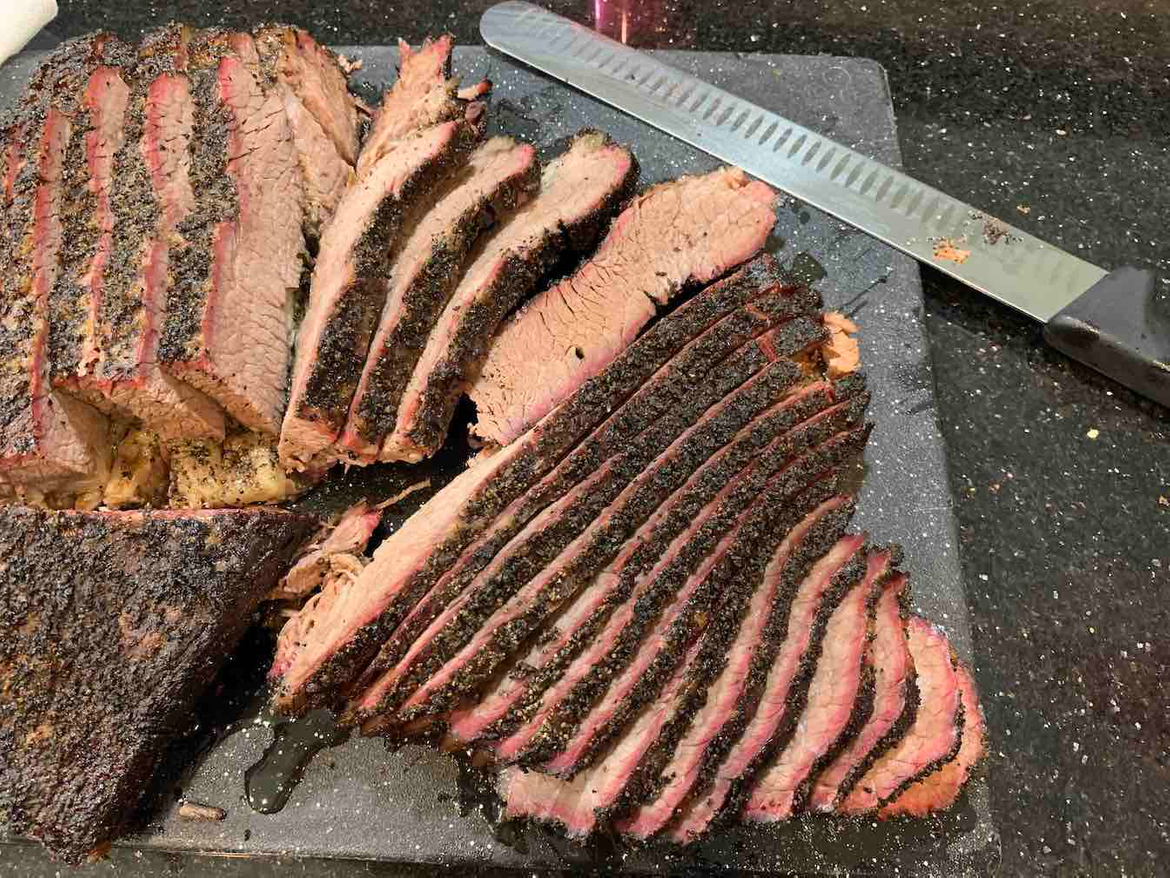 This post contains affiliate links which help support this site.

🥩 Sous Vide Steak 🥩 Steak is a great candidate to cook with the sous vide method because, like other proteins, you can cook it exactly…